The past few weeks I've been spending sooooo much time on debauchery and I felt that I need some respite from all that. So last weekend I invited L, PJ, and the Pranses on a walking tour of Thonburi, which is Thailand's old capital, just across the Chao Phraya River. Because I take the river boat quite often, I've always been curious about the interesting temples and churches that line the bank of the Thonburi side. Luckily, I found this recommended walking tour that plots some fascinating sites not usually found in the conventional guide books.

We began our tour by taking the Choao Phraya Express Boat to the Memorial Bridge. It was then my first time to walk across the river, indeed a different perspective to observe the bustling waterway. 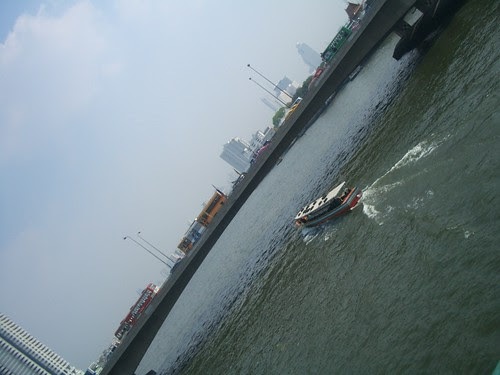 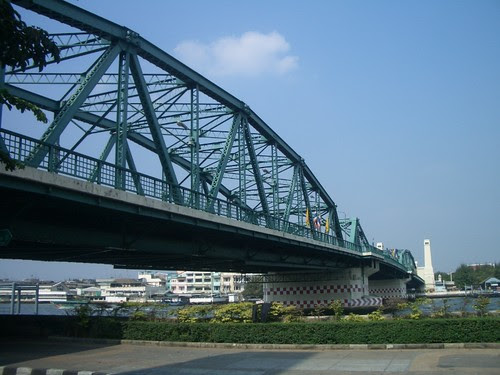 A few twisted alleys from the bridge led us to the Princess Mother Memorial Park, an oasis in the middle of the narrow and cramped neighborhood of shophouses. Around the said park is Kuan Ou, a Chinese-style shrine perched on the edge of the river. 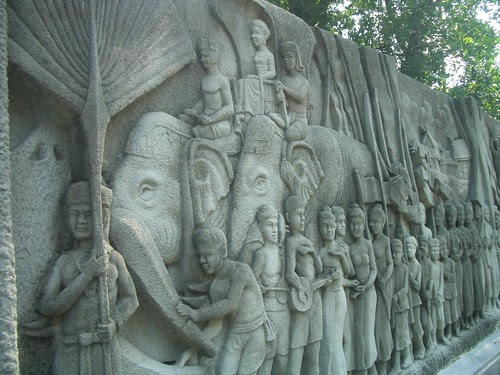 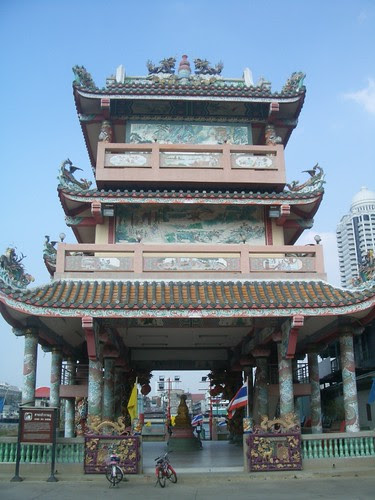 Our next stop was Wat Prayoon. The wat (temple) is very typical of most Thai temples save for the humongous chedi/stupa that looms over the complex. 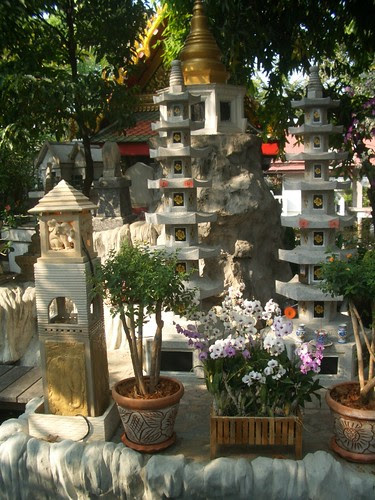 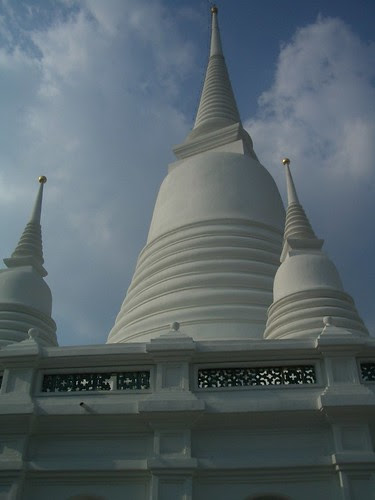 More narrow sois later, we found the Santa Cruz Church. PJ, a devout Catholic, was pretty excited for the visita iglesia, he even brought a veil (as in!). OK, it was a sarong. Disappointingly, the doors of the church were closed. It was very fascinating how they put the picture of the King on the facade of the church, along with the national and royal flags. I've never seen anything like it. 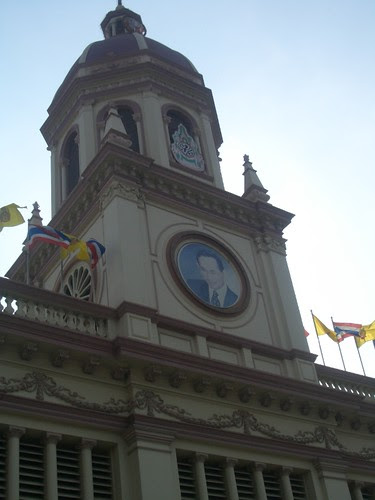 Our next stop was Wat Kalayanamit, a riverside wat that has a huge, and I mean fucking ginormous, Buddha statue. It was the most humongous indoor Buddha statue I've ever seen, although I heard there are far more larger ones than this. It's unbelievable really. Together with a number of worshipers, PJ and L did some of those fortune sticks thingie at the foot of the image.

Check this picture of me in front of the Buddha. Can anybody tell me which is shinier: the Buddha statue or me? Doesn't my face look shimmering, shining, and splendid (rolls eyes)? Note to self: oiliness is next to ugliness. 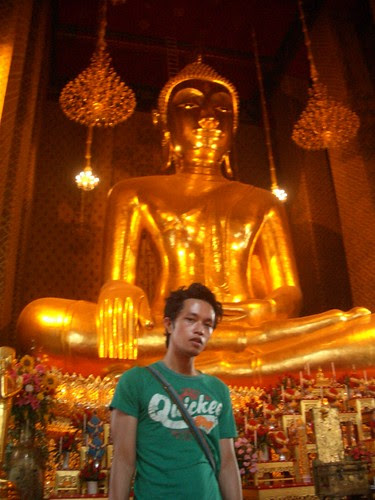 Outside the wat, is the jetty where a flock pigeons permanently reside. We had a blast feeding them and chasing them crazy all over the place. (Thanks to PJ for the shot below.) 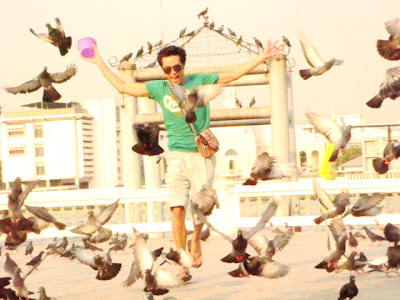 Wat Arun (The Temple of Dawn) was actually not in the agenda, but since we realized that it's just a short walk away from the temple, we decided to drop by the famed Bangkok landmark anyway. I had been there previously on a rainy day, and indeed it was worth visiting again the place during sunset. The river scene could not be more than resplendent, especially if one looks to the large expanse that is the Bangkok side of the Chao Phraya River. We were clearly mesmerized by the view from Wat Arun, the temple guards had to literally drive us away with their whistles a few minutes before closing time. 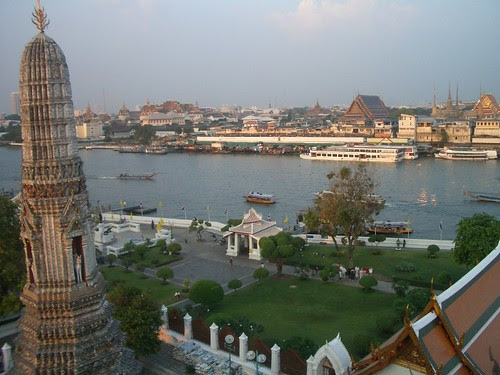 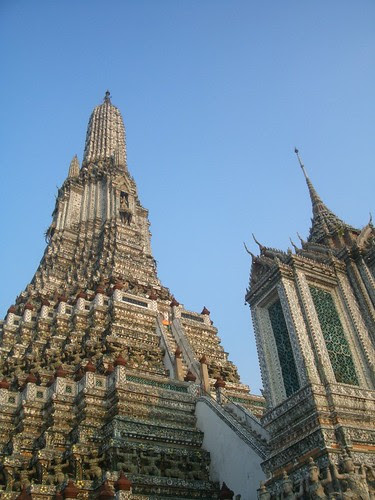 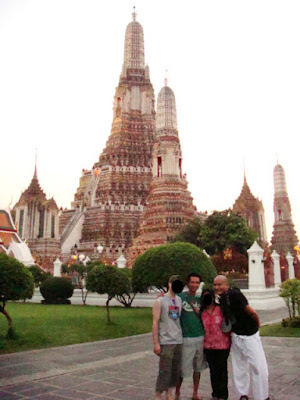 Crossing back to the other side of the river, we had dinner at one of the sidewalk food stalls at the jetty near the Grand Palace. After a long chit chat session, we walked towards the usual Saturday evening frenzy in Khao San Road where we had some drinks before we finally went home exhausted.

By any measure, I had a great time that day although I don't know exactly how much UV rays touched my skin during such a hot afternoon.
posted at 9:46 AM

It is amazing how much one could discover on foot.

ay sama ako. i wanna go back to hk.

at tsaka mare next time magdala na tayo ng oil wipes so that we wont sit next to ugliness. hehehe

Nai Luang is everyone's heart. You don't have to be a Thai Buddhist to know how special Nai Luang is. I'm only part Thai, and already, I feel my connection to Nai Luang's acts of compassion.

i agree. the love of the thai people for the king is truly admirable.

thanks for visiting my blog. cheers!

On my blog Traveltobangkok.blogspot.com you find more tipps for walking tours.

hi marhas. thanks for dropping by. your blog is very helpful! i'd surely put it on my list of bkk references. cheers!

kawadjan
Bangkok, Thailand
ka.wad.jan -- bamboo in the surigaonon language. i haven't done anything grand yet so i have nothing to brag about my self. but i'm working on it, you just watch out. :)